Canguilhem's "The Normal and the Pathological" in the Twenty-First Century 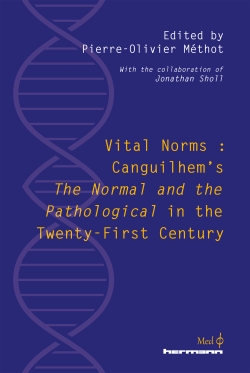 Medicine exists “as the art of life” because individuals have come to identify certain states as being in need of correction “in relation to the dynamic polarity of life.” Written in wartime by French philosopher Georges Canguilhem (1904-1995), The Normal and the Pathological offers a powerful and unparalleled critique of biological and medical thought.

Drawing on the Œuvres complètes and on unpublished manuscripts, this collection of new essays situates The Normal and the Pathological in its own philosophical, scientific, and cultural context and brings Canguilhem’s writings into conversation with pressing epistemological issues in the biological and the social sciences. It also articulates his critique of norms and normality within current debates in the philosophy of medicine and medical humanities. Exploring the richness of Canguilhem’s philosophy, Vital Norms demonstrates how fertile his work remains for our understanding of health, disease, and illness in the twenty-first century.

“Vital Norms breaks new grounds in the philosophical and historical study of Georges Canguilhem’s masterpiece, The Normal and the Pathological. Collecting a series of engaging and insightful essays, it analyses Canguilhem’s rich and complex thought using archival material and published sources, and shows its enduring relevance for challenges posed by contemporary life sciences and medicine.” Camille Limoges (CIRST)

Pierre-Olivier Méthot is Associate Professor of Philosophy at Université Laval (Quebec City), where he holds the Canada Research Chair in Medical Humanities and History of Biological Thought.

Jonathan Sholl is Assistant Professor of Medical Philosophy in the Department of Philosophy and History of Ideas School at Aahrus University, Denmark.